Lies I Told by Michelle Zink 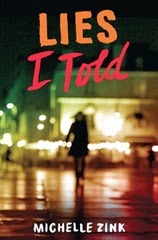 After four foster homes Grace was thrilled to be adopted and have a family.  Okay so she was adopted into a family of grifters and making new friends and lying to them is starting to wear on her.  But she has a Mom and Dad and an older adopted brother to look out for her.

The latest situation feels different.  Grace makes real friends at school and actually really likes that boy she’s suppose to get close to as a target.

Non Romantic Relationship – I enjoyed the relationship between Grace and Parker, her brother.  They viewed their adopted situations differently – Grace naïvely accepts her adoptive parents con artists ways because she really wants a family whereas Par

ker recognizes the manipulation, but sticks around for Grace.

The Nemesis – The school’s queen bee Rachel doesn’t warm to Grace and at first when reading she comes across as the one dimensional mean girl who doesn’t like the new girl, but there is more to her than that – she’s protective of her friends and not purely from a jealously standpoint.

Not Standalone – I had a hard enough time getting to the end of this one with all the lying to friends and manipulative parents.  I seriously sped read the last 100 pages or so just to find out what happens only to have it end very abruptly without any resolution at all.  I can’t figure out if the reason I’m not going to read the follow-up is because I don’t care enough or because I’m so totally annoyed by the non-ending.  Probably both.

Overall there were some good elements and I cared enough to finish. But I didn’t enjoy the last third of the book and don’t plan to read the sequel.