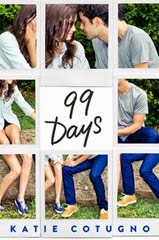 I requested it at the library the first time I heard about it.  My turn came up last week.

Very Brief Summary
Molly messed up pretty big.  Love triangle between brothers big.  When people at school found out and the bullying started her solution was to run to boarding school. Now she’s back for the summer, exactly 99 days until college starts and since she can’t run for the time being her plan is to hide out.
It turns out hiding isn’t in the cards and Molly stumbles into a job, a couple of friends, and back into the arms of Gabe (older brother).

The Good
A flawed heroine – I’m torn about whether to put Molly in the Good or Bad category.  She’s just…frustrating. I chose good, because I like flawed characters in novels.  Too often female characters are expected to be good and are judged way more harshly then their flawed male counterparts – a point that is made in the book.  When I look back on the reading experience I realize that Molly is 18 and just doesn’t know who she is.  She’s not purposely playing the brothers – she’s just stagnant – not choosing because she’s afraid.

Great female secondary characters – Imogen, Tess and even Julia are given depth even if they are briefly in the novel.  I thought Julia was going to be a classic bully, but t

he author does a really good job of giving you her side; not justifying the behavior but giving it context.

The Bad
Molly’s mother – I have two huge parental no-no’s that are chronic in YA novels. First, publicizing anything that your child told you privately.  I think this is going to get more and more common with children growing up with their parents on social media.  Second, parents trivializing their teen’s feelings.  I know it can be tempting because there is so much drama and angst associated with it, but that is because they genuinely feel that level of angst.  Minimizing it doesn’t help it makes them not feel heard.  Anyway Molly’s mother is the one who publicized the issue that resulted in the bullying and then in the first 4 pages of the novel proceeds to trivialize the trauma her daughter has faced because of it.  I was so seriously pissed.

The Results
I had strong feelings about 99 Days both good and bad.  That can make for a difficult read, but it’s not one I’ll forget anytime soon and I really want other people to read it so we can talk about it.