What I’ve been reading lately

Summer has just flown by and as much as I'm ready for some lovely Fall weather, I'm trying to avoid thinking about Winter following close behind.  Summer doesn't tend to be a great reading season for me, but all of these are definitely worth a read.

This is a very strong book that didn’t fully connect for me. That may be partly by design. Marin, the MC, is dealing with a heavy dose of grief (and several other emotions that aren’t revealed to the reader until much later in the book). I felt the portrayal of grief was accurate, but it made it hard for me to connect with Marin. This is still a book I would recommend depending on the reader.

LOVE, LOVE, LOVE! I started this on audio read by Kathleen Wilhoitte (Luke’s sister Liz on Gilmore Girls) and was immediately drawn into the story. It’s part eccentric, suburban mom drama / part disappearance mystery, but mostly it’s funny. I switched from listening to reading about 90 minutes in because I had to finish that day. There was no way I was going to sleep until I knew what happened.

Reese Witherspoon acquired the movie rights to this book in October 2016. The book wasn’t released until March 2017. I really enjoyed the book and for what it’s worth think it will make an excellent movie. Excellent mystery, good characters, and probably the strongest sense of place I can remember feeling when reading. The setting felt tangible

Very dark novel set 50-75 years into the future. Global Warming caused the oceans to rise and the fallout resulted in a second US civil war. This book mostly follows Sarat Chestnut as her family is displaced by conflict to a refugee camp. As dark as this novel and concept are, the tone wasn't grim and it didn't overuse foreshadowing. The author doesn't care if you know the end - what's important is the journey and I found it interesting and thought provoking.

What have you been reading lately? Answer in comments or if you have a blog post you can link up at Modern Mrs Darcy.
Posted by Brandy at 8:18 AM 2 comments:

As I mentioned before, I live with my mom now.  One of the awesome things about the house Mom bought is that all the bedrooms are good sized. I’m not in the master and my room is 12 ft by 17 ft.  The bad news is that it does not have a walk in closet. I’m not saying the wall closet isn’t a good size, but about 2 feet of it is behind the wall and not very useable.  Also, can we all agree that bifold doors are a non-functional eyesore? 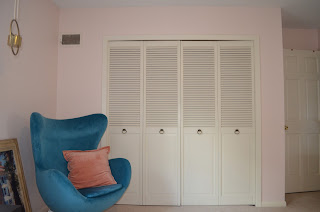 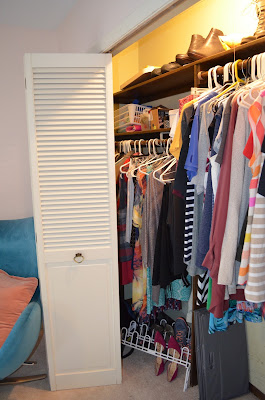 The end result is that I only use about 4 ft of my closet.  You can see the mess in the area I can't reach.  That's where clothes, etc go to die. 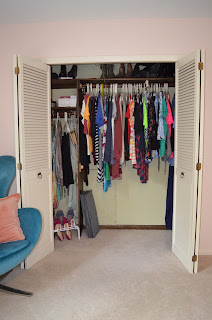 Due to a reduction in closet space, I now have two dressers in my room instead of one.  The room is big enough for them, but it feels like too much wood on that wall with both of them and I’d love to be able to go back to a single dresser. 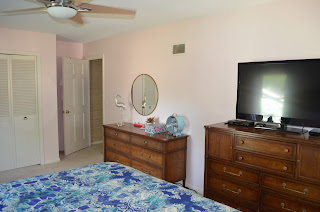 Did anyone notice this lovely panel in the closet pics?  That’s right, behind my closet is ATTIC space! 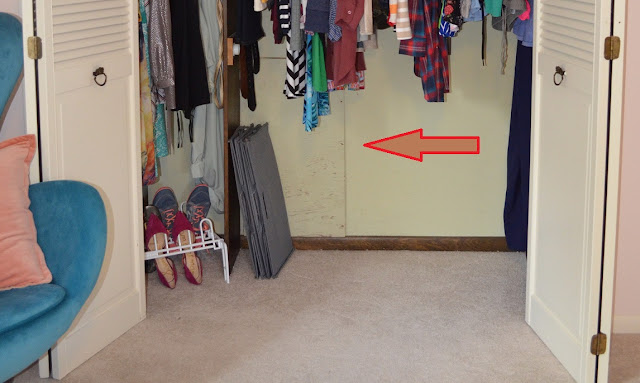 Now the roof line does start to slant down right where my closet ends, but I don’t need the whole closet to have 8 ft ceilings.  Since my Mom is planning to hire a contractor to redo one of the bathrooms and the kitchen anyway, I figure it can’t hurt to ask how much it would cost to expand my closet into currently unfinished space. 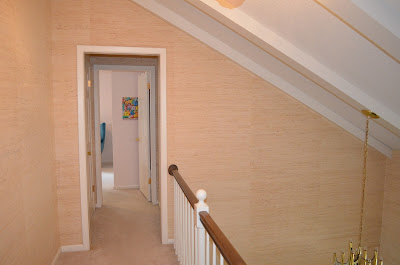 This is a picture from the hall (loft?) towards my bedroom.  Straight into my room is the closet and you can see how the roofline starts sloping down right where the closet ends.  From my rough measurements I believe I can go back at least 4 more feet and have the back wall still be at least 5 ft high.

Quick key to the following floor plan ideas: I have a million minor iterations for layout within the closet once the exterior structure is done, but what is shown in these is just a rough idea.  Clothing racks in gray scale are single hung at 5 ft.  Clothing racks in color are double hung at 6 ft.

Move the back wall back 2 ft and leave the existing bifold doors.  I would make about two more feet of hanging space usable and I could add a section of drawers/shelves.  There would be no disruption to the wall of my room and I’d leave the pull light alone. Technically, this doubles the size of the closet, but in terms of added storage space it doesn’t add that much.  It just means it would all be useable. 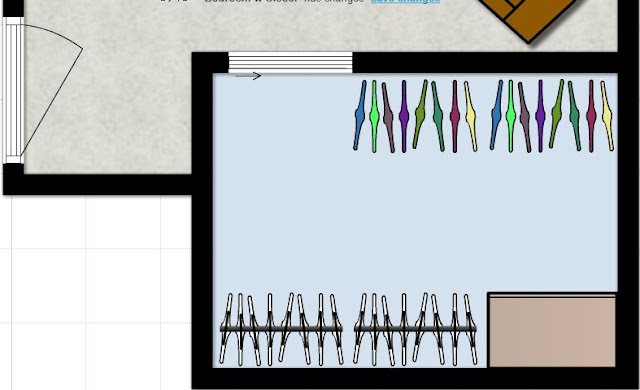 Move the back wall back 4 ft.  Take out bifold doors, rebuild wall with pocket door to save space. In this scenario, the back wall would be 5 ft high.  Allowing for 2 ft for hanging clothes at that height.  This puts that ceiling height right in front of the clothes at least six and a half feet which is plenty for me and should work for most of the population.  In this scenario I would also add the electrical switch and change out the light fixture.  I’d also try to add an outlet to either the East or South wall (luckily the room is oriented so top is North - happy coincidence).

So I'd been looking at the unused space to the left of the closet thinking, "Man, I want to use that!".  I just didn't see myself storing much in a dark corner.  Last night I had an epiphany, "Move the door!".  Epiphany might not be the right word because I'm not 100% sure that this door position would work with the sloping ceiling. As you can see in the picture below, that section of wall doesn't allow for a pocket door so the door would need to swing into the closet. I *think* a 80 in high by 30 wide door would clear, but it would be super close.
I definitely want to run it by someone who knows things. 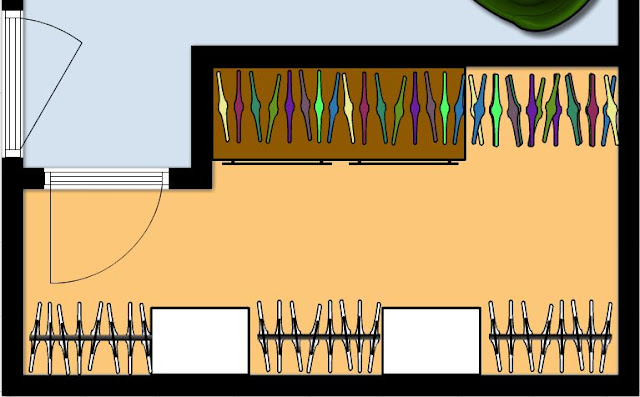 If I did this option I could store all my clothes/shoes in the closet and still have empty space.  I mean 84 sq ft is overkill (it's like half a tiny house), but I feel like if I'm going to do it, I should go all out:)

I'm sure that it will cost more than I'd like and I wish I was brave/skilled enough to DIY it. But, alas, I haven't even looked behind the panel into the attic to see what's going on back there so I think I'll have to leave this one to the professionals.  Has anyone ever finished an attic space with slanted roof lines?  Anything I should be prepared for?
Posted by Brandy at 7:00 AM No comments:

It's almost August of 2017, but I'm doing a quick catch-up post of the best books I read last year. As I mentioned last week, 2016 wasn't a banner year in books for me, but there were still several winners.

Lauren Graham's memoir was everything I expected and more. She'd proven to me that should could write with her foray into fiction with Someday, Someday, Maybe. Talking as Fast as I Can was a fun insider's view of two of my favorite shows.

Scrappy Little Nobody
So funny and surprisingly insightful. I've now read it three times and every time I finish I go look for more of her movies to watch.

Have you ever heard of a Space Opera?

I think I've seen movies that would be considered Space Opera's, but it's a sub-genre I wasn't really aware of until I read these two books. These are told in emails, journals, etc during a series of disasters in space in the future. I cannot overstate how much I love these and how bummed I am that Obsidio, the third and final book, was delayed until March of 2018.

Do you need a new favorite OTP (one true pair)?

Far and away the best hate-to-love romance I've ever read. It's believable, adorable and funny. Biggest criticism is a lack of a sense of place. I have no idea what country this takes place in, let alone city.

Think you don't "get" literary fiction?

I don't have great luck with literary fiction, but I try to read one a year. I enjoyed this even thought it turns out I didn't "get" most of the references. This stands as a great story even if you aren't up on literary mythology.

Side note: After reading, I listened to Slate's Book Club Podcast where they discussed this book and found out I understood roughly 3-5% of the subtext. There was a lot going on I wasn't aware of.

There were other books I liked, but these were the biggest winners.