Second Bedroom (aka Mine)

Pretty much the only downside of living with my Mom is that it reduces the amount of square footage that is "mine" to decorate. Luckily, we have similar taste so when she renovates the kitchen and bathroom I'm sure I'll get to consult. She also confirmed today that I can include posts about those renovations on the blog as long as she is not in any of the pictures:)

I am quite possibly the worst at remembering to take "before" pictures. So this post is pretty much a "here is my bedroom mostly done" post. The room is 17" by 12" which is really generous for a second bedroom. My king size bed only looks slightly too big for the room. With one exception, I already had all of the furniture. 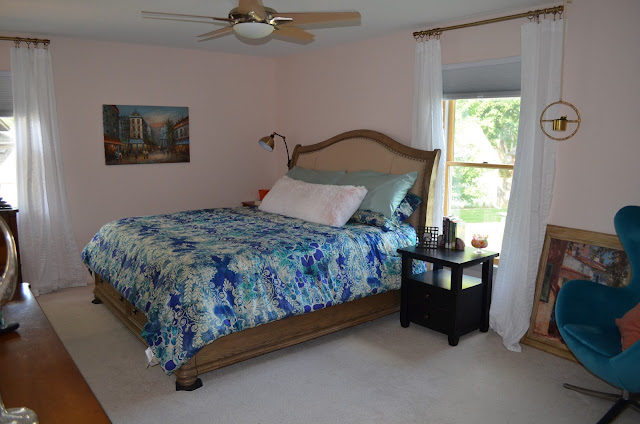 I decided to look for new bedding and decorate the room around that.  I ended up falling in love with this comforter when I found it on Zulilly. You can still find it here in Twin or Full/Queen, but I can't find it in King size anymore. I loved that it was a pattern, but sort of a "loose" pattern. I also liked the large scale. After finding the bedding I originally thought I would go with a light blue/teal on the walls, but decided I needed some contrast. What can I say, I'm a color addict.  On my Mom's suggestion I went with blush (Millennial Pink). Official color -  Valspar Adobe Blush. 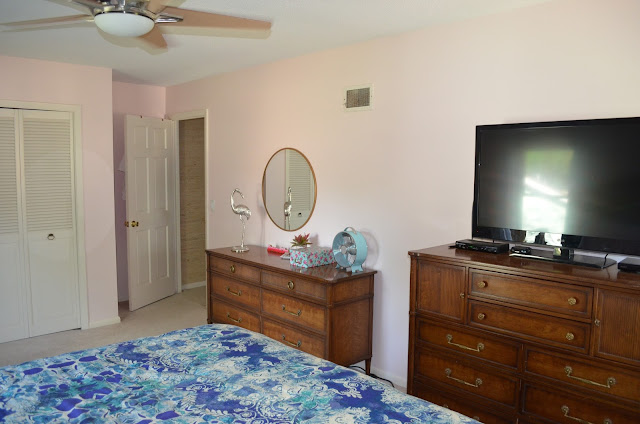 Both of the dressers are Henredon from the 50's that I found on Craigslist several years ago. I'd rather only have one in the room, but I'm feeling a closet space pinch at the moment so both are necessary (and my work uniforms are still in a different bedroom). 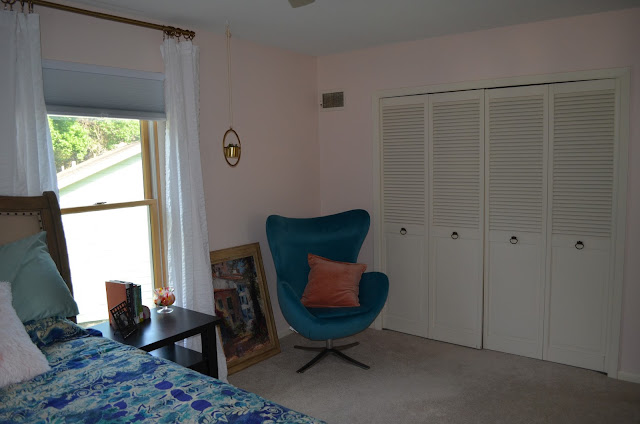 The only new furniture in the room is the Egg Chair.  As much as I would love the real deal, I just couldn't swing the cost. Plus, I was pretty sure I would find it comfortable, but I couldn't find one locally to sit in and try out and shelling out a lot of money for a chair that might be uncomfortable seemed crazy. I found the lovely teal knockoff (feel free to flay me in the comments) on Overstock.  Sorry the picture is so dark:(.

I haven't decided if I'm going to hang the print that is currently on the floor. I had it frame in my last apartment (so at least a decade ago). I still love it, but I'm afraid it's to big for the wall with the chair.  Still mulling.

There's the official introduction to my room. If there are any other pieces you'd like sources for let me know in the comments.
Posted by Brandy at 8:00 AM No comments:

Quite Possibly the Most Personal Post I'll Ever Write

I've been mostly MIA this past year and a half.  I made a renewed commitment to blogging in 2015 and had a great time with it; that year was by far my best reading year.  I finally crossed the three digit read goal (108!).  I read Daughter of the Forest by Juliet Mariller, and discovered that I love Cormoran Strike just as much as Harry Potter.  I hit a great groove on audiobooks and re-read/listened to the first three books in The Lunar Chronicles by Marissa Meyer in preparation for Winter's release.  Rebecca Soler is an amazing narrator who brought something new to the experience.

In September of 2015, my Dad underwent an outpatient surgery. Two days after the surgery he was hospitalized for severe pancreatitis. He died December 29, 2015 after 103 days in the hospital.  He was 62.  There were many ups and downs over those three months and while I remember highlights, most of the medical stuff has become pretty fuzzy.

As I've mention before my job gets incredibly busy during the Christmas season. Work and Dad’s hospitalization didn’t leave much time for blogging.  I fully intended to pick up the blog again in January when things settled down.  I even wrote some 2015 wrap-up posts from the hospital in December; they were easy.  I’d read so many great books in 2015 that I had tons of material.

I think there were two factors that killed my blogging motivation as I got into 2016.  First - MAJOR book slump.  I wasn’t loving anything.  To be fair I wasn’t HATING anything either – they were all just…fine.  It’s hard to get excited about fine.  Second, I was still processing my Dad’s death and I’m a very private person.  I’m never going to publish an in depth post on those months or how I dealt after the fact.  In 2015, I’d started doing more personal posts related to reading.  In 2016, I wasn’t ready to post anything personal.  I tried a few times, but got stuck after a sentence or two.  Even reviews can get personal.  How I feel about a book is intrinsically tied to my life experiences.  The first book I read in January of 2016 was Me Before You by Jojo Moyes.  There was no way to write a review of that without being personal.

The rest of 2016 didn’t get any better from a “free time/head space for blogging” perspective.
March: My dog, Gizmo, died suddenly at six and a half.
May: I decided to fix my house up to get it ready to sell in August.
July: I broke my foot.
August: I got a puppy (Boston McDoodle). 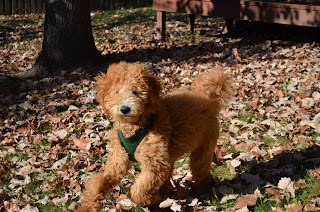 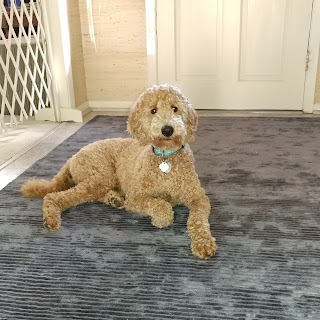 I finally got my house on the market in early October (and sold).  My Mom bought a new house in November and I moved in with her.  The original plan for me to stay there for a year to save money, but I like living there, she likes having me and it really makes no sense for us to maintain two separate households for one person each, when we get along well.

Hopefully getting this out there will free some headspace for me to write reviews again.

Posted by Brandy at 8:00 AM No comments: