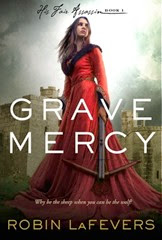 I’ve had this on my Kindle for quite awhile and last night while scrolling through for something to read decided to give it a try.

A wonderful heroine - Ismae is essentially sold by her “father” to a pig farmer at fourteen to be his wife. Spared an abusive wedding night by a local potion brewer (the herbwitch), she’s whisked away to a convent.  But the convent is a little different.  They train female assassins, who serve the god of death, Mortain. Ismae is strong without arrogance and she struggles to serve her loyalties while staying true to herself.  There’s a strong element of coming of age in this novel as she figures out who she is outside of the convent.

The white washing of mythology into Christianity -  Grave Mercy has a fascinating representation into how the gods pre-Christianity were woven into the present day church as saints.  Not the exact gods/saints represented in this book, but it was easier to get people to accept Christianity if they saw some of their own mythology within it.  (ergo gargoyle's on churches to ward of evil spirits, Christmas lining up with Winter Solstice, etc).

Slow building romance - Duval and Ismae are initially suspicious of each other.  It’s actually more than initially, because as they start to feel an attraction for each other it makes them question everything even further. Once they finally decide to trust each other their relationship has had time to build into something beautiful and believable.

Excessive Intrigue – While I believe the amount of intrigue and betrayal to be an accurate reflection of the era, it still slowed down the pacing of the book and resulting in pages of Ismae questioning herself as to who to trust.

I put the book down several times when frustrated by the constant questioning, but was compelled to pick it back up quickly because I wanted to know how it ended.  It dragged a bit in the middle as a result, but overall I really enjoyed it.