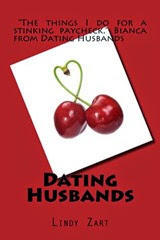 One evening she’s decompressing at the local bar and meets Drew.

Here’s where I have to stop summarizing because I can’t summarize anything about her relationship with Drew in a neutral way.  Basically Drew suppose to be a nice guy who Bianca is rebuffing because she believes all men are cheaters.  Unfortunately, after Bianca declines his offer to walk her home he decides the nice guy thing to do is follow her – for her own safety of course. Honestly the relationship was doomed in my mind from that moment on so I don’t know why I kept reading.  Following someone home who doesn’t want you to is not caring, it’s STALKING.

There are moments in the book that I think the author intended to be funny – PI Bianca in a disguise hitting on a guy and Drew stepping in to “rescue” her against her will.  Not funny to me.

And the biggest irritation in this books for me…substituting the word “fuck” with “flip”.  Frequently.  Its totally believable that Bianca’s character would cuss a lot.  It’s not believable that she would use the word flip as a filler and it was distracting.

I’ll probably vaguely remember this books for awhile mostly because it annoyed me, but I wouldn’t recommend it.

Amazon has been recommending Lindy Zart books to me lately so I decided to give one a shot, but won’t be trying any others.