My Heart and Other Black Holes by Jasmine Warga 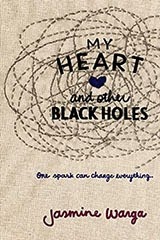 I found this on a list of the best books coming out this year and recently my hold came up at the library.  I don’t want to give away too much plot but Aysel has an infamous father and is a social pariah at school.  She struggles to relate to her mother and has decided she wants to end her life.  Her biggest concern is that she’s attempt suicide and be unsuccessful.  Enter FrozenRobot (Roman), a boy she meets on a website for suicide partners.

Physics/Math – I’m a math nerd. So I loved that physics and math are important to Aysel.  It’s how she sorts through her life and what causes her the most questions about her suicidal intentions.

Well built story - There’s no info dump.  The author does a beautiful job of alluding to Aysel’s past and what happened with her father, giving pieces so it’s always on your mind.  I really wanted to know what happened in the past but was interested enough in the present to continue reading without skimming to find out what happened.

Opposites Attract – Aysel might be a little stereotypical of what we think a depressed teenager looks/acts like, but Roman isn’t.  Until a year ago, he was a popular athlete.  Even though he’s not participating anymore the people around him still care and are concerned.

The Bad
I got nothing – I’m not saying it’s a perfect book, but there are no clear flaws for me.  It took me three weeks to complete this review trying to find something to criticize and decided to throw in the towel.

The Results
Really, really good, possibly excellent.  It’s on my list of books to purchase for reread.
For those who like star ratings – 4 out of 5 stars