Daughter of the Forest by Juliet Marillier 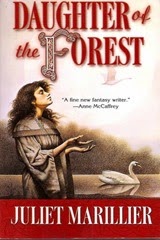 Daughter of the Forest

Sorcha is the youngest of seven and the only daughter of Lord Colum of Sevenwaters.  Her mother died right after she was born so she has been raised mostly by her older brothers – wonderful brothers who do everything in their power to protect her and make sure she is content. Pretty much the only unhappiness in Sorcha’s young life is that her father barely acknowledges her.  He seems to only have a use for the sons who are interested in fighting the battles to maintain their land.

When Sorcha is 12 her father brings home a new wife – who immediately puts Sorcha and most of her brother’s ill at ease. Their unease is justified when the step mother casts a terrible spell that transforms Sorcha’s brothers into swans. The Queen of the Forest gives Sorcha a task she can complete to reverse the spell on her brothers, but it will be emotionally and physically painful. She much complete this task in silence and never communicate in any way WHY she is doing this task that seems mad.

At first Sorcha works to complete her task in isolation only seeing people during the 2 nights a year her brothers return in human form. After a personal tragedy, Sorcha finds herself kidnapped/under the protection of her father’s enemies and taken far from home.  For the first time she struggles between love and desire to save her brothers.

Daughter of the Forest takes a little while to really get into. The author take her time making sure the reader not only knows Sorcha well, but also have a very good understanding of each of her brothers. Time is also spent world building so the reader feels the magic of the forest and the sea.

Her brothers are all interesting in their own right – the payoff for the slow buildup at the beginning of the book. I love how protective they are of their sister and how hard it is for them to watch her struggle for their benefit during the curse.  They also drive me a little crazy when they make decisions for her after she has proven herself more than capable.

I did enjoy reading the first slower section of the book, but once the spell is cast the story does speed up. Sorcha’s an amazing heroine. Steadfast and strong, while also showing vulnerability.  She’s smart, caring, patient and talented. She immediately tackles the daunting task given to her by the Fair Folk and stays determinedly on it with one small exception.

Even when kidnapped and taken far from home she immediately starts planning how to complete her task in unfamiliar territory. Adding to the challenge are confusing feeling for her kidnapper, Red.  Kidnapper is really a fair term for Red.  When Sorcha first met Red he was pulling her from water to save her from drowning.  She was undernourished and refused to speak. By the time they returned to his home she was following willingly.

Feelings develop between Red and Sorcha, but these are confused by the many obstacles between them.  Red’s brother disappeared near Sorcha’s lands, and Red’s people don’t like or trust Sorcha.  Her main priority is her brothers, but despite all this they grow closer.

My biggest complaint is not a failure of the book – it’s a personal reading quirk. I struggle with foreshadowing.  My reaction to foreshadowing is to want to skip ahead any miss the sad/scary/bad stuff.  I’d rather just be surprised.

Overall I loved this book and I’m so happy Elizabeth recommended it!