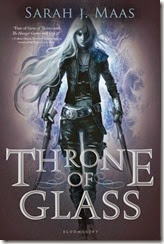 After serving out a year of hard labor in the salt mines of Endovier for her crimes, 18-year-old assassin Celaena Sardothien is dragged before the Crown Prince. Prince Dorian offers her her freedom on one condition: she must act as his champion in a competition to find a new royal assassin. Her opponents are men-thieves and assassins and warriors from across the empire, each sponsored by a member of the king's council. If she beats her opponents in a series of eliminations, she'll serve the kingdom for three years and then be granted her freedom.

Celaena finds her training sessions with the captain of the guard, Westfall, challenging and exhilarating. But she's bored stiff by court life. Things get a little more interesting when the prince starts to show interest in her... but it's the gruff Captain Westfall who seems to understand her best.

Then one of the other contestants turns up dead... quickly followed by another.

Can Celaena figure out who the killer is before she becomes a victim? As the young assassin investigates, her search leads her to discover a greater destiny than she could possibly have imagined.

I obviously loved this book considering I read all four in a couple weeks – it doesn’t break my Harry Potter record of 7 in two weeks, but still notable.

Celaena is a bad ass – which isn’t really that noteable in current YA, but what was refreshing was that she knew it.  I actually enjoyed reading a female protagonist who was a little full of herself.  At the beginning of the book this is 100% her defining characteristic, but as the book progresses you start to see other facets of her personality.  She’s a bookworm (so pretty much anyone reading can relate), she’s surprisingly compassionate and very loyal.

As Prince Dorian’s Champion she spend quite a bit of time training with Chaol Westfall.

Prince Dorian originally picked Celaena as his Champion as an act of rebellion against his father the King, who is pretty much the embodiment of evil.  It doesn’t take long before Dorian admires Celaena for more than her ability to piss off his father.  He finds himself drawn to spend more and more time with her to the frustration of his longtime friend Chaol

Chaol Westfall takes his responsibilities as Captain of the Guard very seriously, as well as his long time friendship with Prince Dorian.  Neither of these line up with having a convicted assassin around.  Especially one in such close proximity to Dorian.  But since Celaena is representing the Prince in the competition, Chaol must spent time training with her.  Chaol thaws towards Celaena, begrudgingly admiring her determination…and other things he doesn’t really want to admit to himself much less anyone else.

Honestly my biggest knock on Throne of Glass is that there are very clearly defined good guys and bad guys and I LOVED all the good guys all the time and HATED all the bad guys all the time.  Prince Dorian and Chaol are both amazing men, but with different personalities.  Nehemia is an amazing representative for her people and a good friend to Celaena.  The King, the Duke, Cain, and Kaltain are all manipulative and power hungry.  Simple but I generally like my characters a little more varied than that.

I don’t think this is a spoiler but this small complaint changes in the next books.  I started to have a little empathy for some previously 100% evil characters and the “good guys” displayed some imperfections.

My summary in a nutshell – love the characters, the world building is amazing and I can’t wait for the next book!