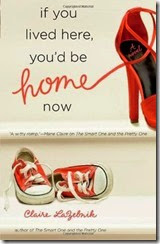 If You Lived Here, You’d be Home Now

When Rickie headed off to Berkeley she had done everything right.  Good in school, motivated.  Fast forward 7 years and she’s a tattooed, pierced, single mother back living with her parents. Rickie knows she’s really lucky to have her parents who are supportive financially.  In addition to letting her live there, they pay for her son’s private school education.  But Rickie is really struggling.  She takes one online college class at a time (mostly just to say she’s still going), but she doesn’t know how to get out of her rut.

Rickie’s son Noah is 6 and he’s a little different.  He’s undersized and suffers from Celiac disease resulting in his being an outsider at school, dealing with bullies.  Rickie knows that it’s also partly her fault – she’s about a decade younger than the other mothers so she hasn’t joined the school social network either.

After one particularly bad PE experience, Rickie meets with the principal to talk about what can be done to improve Noah’s situation at school.  She’s surprised when she meets the new PE teacher that he’s young – just a year older than she is, but she leaves the meeting unimpressed and like nothing is going to change.

That’s when Rickie’s half sister Mel steps in.  Mel is also living back at home.  In her case it’s because her husband cheated but instead of fighting over the house, the kids stay at the house and Mel and Gabriel move in and out.  Mel is probably the best older sister she could be and is genuinely kind to everyone, but especially Rickie.  So when Mel signs them both up for the Event Hospitality Committee at the school, Rickie reluctantly tags along.

I’ve read this book countless times and I can’t quite put my finger on why I connect with it so much.  I really enjoy reading books about people who are growing into themselves and changing – I think that’s why I read so much YA.  But when I find the adult books that do that well it’s a treat.  Because I think the coming-of-age process continues throughout our lives.  Rickie tried to grow up too fast and it bit her in the ass so she stopped. I really enjoyed the journey of her starting to move on again and in doing so help her son face some of his fears.

The romance is perfect and it’s not the focal point of the book.  I don’t quite think it’s a back story, more like a parallel.  The relationship develops naturally.

The most frustrating parts of the book are Rickie’s interactions with her Mom. And I like Rickie’s mom – she clearly wants the best for Rickie and is just trying to help her get moving again, but the effort just results in Rickie feeling pressured and defensive and she lashes out.  I understood that feeling because my mom can bear the brunt of my frustrations at times, but it can be hard to read.